The City of Visalia, Calif., is the winner of the 2015 Project of the Year Award from WRAPP, the Western Region Association for Pavement Preservation (WRAPP), formerly the California Chip Seal Association.

In 2015, this program encompassed over 1.7 million sq. yd. of surface treatment applications. Intermountain Slurry Seal, Elk Grove, Calif., was the prime contractor, and Talley Oil Co., Madera, was the subcontractor and applicator on the project. Cain Trucking, Tulare, handled off-site product storage and just-in-time delivery of pavement rejuvenator Reclamite emulsion for the project, shipping from Bakersfield to the Visalia area. Visalia’s Jose Herrera, project supervisor, oversaw the project for the city, and public works director Norm Goldstrom, P.E., packaged the project based on PCI and historical findings. 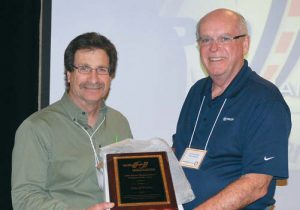 In 2011, Visalia began exploring suitable pavement management systems (PMS) to utilize and monitor street pavement condition indexes (PCIs). The program chosen was Lucity software by IMS (Infrastructure Management Systems). The system was put into place and was ready for applications of various surface treatment methods and applications by 2013.

Generally pavement management programs do not include asphalt rejuvenators within their software due to lack of that knowledge by the program developers, and legacy utilization of historical chip seal or slurry wear course treatments. The City of Visalia goal was to maintain the high street PCIs shown by the PMS program with a lower cost treatment, extending pavement life four to five years. 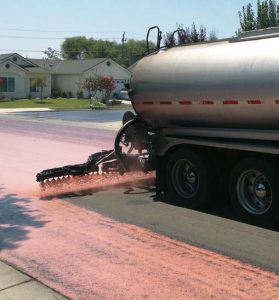 Tricor Refining—producer of Reclamite asphalt rejuvenator—assisted with viewing the road network and placing ring tests for product absorption on the pavements in the program. The application rate varied between 0.07 to 0.10 gal per sq. yd. of the Reclamite emulsion diluted with water 2:1. The job was to maximize the absorption of the rejuvenator, then allow it to cure for a minimum one to two hours, followed by sanding and mechanical sweeping within the same day or within a 24 hour period.

Within the rejuvenator seal project specification was the performance requirement to meet minimum changes in penetration and viscosity and/or changes in the dynamic shear rheometer testing, which measures the stiffness of the asphalt or the complex modulus “G”.

The City of Visalia and Norm Goldstrom’s engineering group have increased PCIs on Visalia streets, and raised the level of public awareness to pavement preservation though an excellent in-house media promotion. The city’s plans to continue utilizing preservation methods promoted through the California Chip Seal Association, now WRAPP.